We currently perform minimal maintenance on the existing vegetation on an annual basis. We till the fields to break down the vegetation. We anticipate continuing this process to control the odour problems previously encountered. For further information email parks@saanich.ca or call us at 250-475-5522.

Following a public engagement process Saanich Council approved the Concept Plan for Panama Flats in February 2014. The specific motions were:

c) subject to the proposed portion of Panama Flats being included in the Agricultural Land Reserve, an Expression of Interest be issued for farming these lands, the results of which would be considered by Council at a future meeting.” 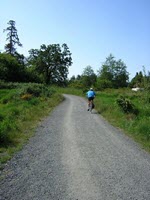 The report to Council and the associated attachments can be found through the following links:

We acquired the property in December 2011 to:

The property was previously used for a variety of agricultural purposes for many decades drastically altering the land. The Colquitz River, which is an important fish habitat, runs along the western edge of the flats. When combined with adjacent parkland the total area of the site is approximately 116 acres (47ha).

We held an open house in October 2013 at Northridge Elementary School to involve members of the public in the planning process.

We worked with a multi-disciplinary team of consultants led by LADR Landscape Architects to develop a concept plan to guide the long range development and operation of the site. The plan established:

Work to fund and implement the plan is ongoing.

Since 2014 we mow and till the flats every September to control the spread of invasive plants and to prevent a buildup of decaying organic matter.