Work is being undertaken to implement priority actions identified in the Agriculture and Food Security Plan. Updates on implementation progress will be posted regularly.

The Agriculture and Food Security Plan was endorsed at the Council meeting on Monday, September 17.
Council also endorsed funds to support implementation over the first two years. The Plan lays out clear actions for Saanich to address to enhance agriculture and food security over the next 10-15 years.

Key components of the Plan include:

The Agriculture and Food Security Plan Task Force and Saanich staff began the project in February 2016 and reached out to the wider community for input throughout the last two years. The Task Force for the project is made up of nine representatives from the community who have expertise in agriculture and/or food security. They are key players in the development of the draft Plan, providing guidance and a touchstone at each phase of the project.

Public engagement throughout the project provided input on key issues, opportunities and priorities.  Stakeholder and public input gathered during the project was based on an engagement strategy, developed with assistance from the Task Force, to effectively and collaboratively connect the community and stakeholders. A variety of public engagement tools were used. Details are listed below and can also be viewed in the engagement summary. 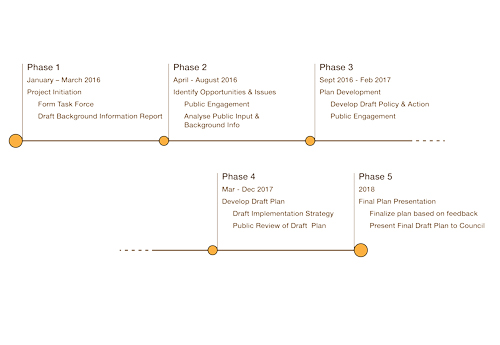 The Draft Plan was ready for review by the public and stakeholders.  The draft of the Plan and a community survey were available online and sent to stakeholder via email.  The draft Plan was presented at stakeholder meetings, at a November 30 Public Open House and at several pop-up events at recreation centres through November 2017.

March to October 2017 - revising potential actions and drafting the plan

Following the January workshop we revised the potential actions based on public input, reviewed the revisions with staff and stakeholders (including Council Advisory Committees), drafted the implementation strategy and prepared a monitoring and evaluation strategy.  During the month of October we created the layout and graphics for the document.

Saanich staff and members of the Task Force held an open house and discussion session event on January 18, 2017. At this event we heard from approximately 60-70 participants. We discussed the key themes [PDF - 286 KB] and the draft “potential action [PDF - 357 KB]” towards the enhancement of agriculture and improvement of food security in Saanich. The key themes and potential actions were identified by the task force, the consultant and staff during Phase 3 of the planning process following public engagement between May and September.

A summary of the public input [PDF - 411 KB] we received at the January 18, 2017 event is available for review. The summary is based on the notes from the event’s five facilitated discussion tables and from individual written comments [PDF - 252 KB] that we received.

The information boards [PDF - 2.4 MB] that were displayed at the open house provide the plan objectives and a timeframe for the planning process; context and background for the plan; public engagement results received prior to January 2017; the key themes; and a draft list of “potential actions.”

Key themes from the January workshop:

A Key Themes Study [PDF - 286 KB] has been prepared following a review of the feedback received from public engagement during Phase 2 of the planning process (see September notes below). The task force and Saanich staff have identified possible action that would fall under each key theme proposed. These ideas will be presented to the public and stakeholders through December and January to review and involve people in identifying possible Municipal action towards the enhancement of agriculture and improvement of food security.

We welcome your input!  Please send your comments on the attached key themes [PDF - 286 KB] to cameron.scott@saanich.ca.

An Agriculture & Food Security Community Survey was available online from May 22 to July 31, 2016.  The survey was developed to seek input from the public on what the opportunities and challenges are for agriculture and food security in Saanich and the surrounding region.  A total of 289 responses were received.  Survey results [PDF - 534 KB] are available for the public to review.

Uplands Agriculture Consulting prepared a Public Engagement Summary [PDF - 632 KB] for Phase 1 & 2 of the project.  A review of the survey results [PDF - 356 KB] and notes from stakeholder meetings [PDF - 308 KB] are included as Appendices 1 & 2.

Thank you to everyone who attended our open house and who completed our survey.  Results from the open house can be viewed here [PDF - 51 KB].

The Task Force drafted a Vision Statement [PDF - 53 KB] for the plan and drafted definitions [PDF - 139 KB] for agriculture and food security and carried out a SWOT [PDF - 74 KB] (Strenghts, Weaknesses, Opportunities and Threats) analysis.

Nine community members have been selected to sit on an Agriculture and Food Security Task Force that will assist in the development of the Plan.  The Task Force members have a range of backgrounds and expertise and will serve as a vital resource throughout the project.

Upland Agriculture Consulting Ltd. has been hired to manage the planning process and facilitate the task force in the development of the Agriculture & Food Security Plan for Saanich. 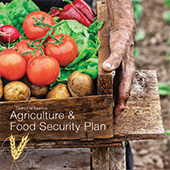