2022 General Local and School Board Elections:

With 20 new EV charging stations, powering up in Saanich just got easier 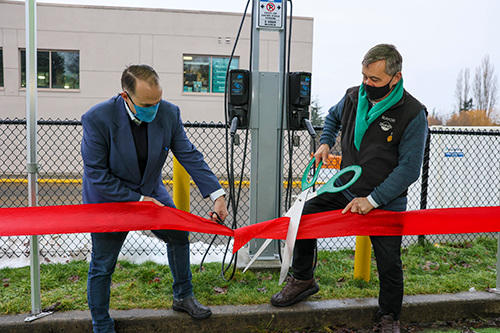 With 20 new EV charging stations, powering up in Saanich just got easier

Saanich, BC – The District of Saanich is opening 20 new level 2 public electric vehicle (EV) charging stations to make it easier for Saanich residents to drive EVs in the community and ensure access to charging on the go.

The 20 new stations are located at the following eight municipal sites, including four brand new locations at Saanich parks:

Through its Zero Emissions Vehicle Incentive Program (ZEVIP), Natural Resources Canada provided a $100,000 investment to the District of Saanich for the deployment and installation of the new EV chargers.

These new stations will add to the 12 existing stations that have been available for residents at Saanich facilities since 2013, and bring the total number of Saanich-operated stations to 32. Since 2013, there have been over 109,000 charging sessions, averaging over 12,000 sessions per year. With the 20 new stations installed, there are now 115 public charging stations in Saanich, including 91 level 2 stations, eight DC Fast Charging (DCFC) stations, and 16 Tesla Superchargers.

Saanich charges a $1/hour user fee for the charging stations to encourage turnover and cover the cost of maintenance and electricity. EV Charging Stations and their availability can be found in real-time on plugshare.com. Instructions on how to access Saanich’s EV stations are available at saanich.ca/ev.

A recent EV Infrastructure Roadmap commissioned by the Capital Regional District (CRD) noted that as of February 2021, there were 240 Level 2 charging stations and 28 DCFC stations in the Capital Region. The Roadmap estimates that 770 new public level 2 stations and 132 new DCFC stations are required by 2030 to support a target of 25% EV ownership in the region. To achieve that target, Saanich will be working with the CRD to encourage and help others, including private businesses, to install public charging, in addition to continuing to install public chargers at Saanich facilities.

Transitioning to electric vehicles is expected to make the largest contribution toward Saanich’s target to cut greenhouse gas (GHG) emissions in half by 2030. In Saanich, gas vehicles account for over 50% of our community’s GHG emissions. Approximately 36% of Saanich residents will need to be driving an electric vehicle by 2030 in order to reach our target.

“We’re making electric vehicles more affordable and accessible for Canadians from coast-to-coast-to-coast. Investing in more charging stations like the ones announced today in Saanich will allow more Canadians to be in the driver’s seat on the road to a net-zero future and help achieve our climate goals.”
-The Honourable Jonathan Wilkinson, Minister of Natural Resources

“It’s very encouraging to see Saanich demonstrating leadership with an ‘if you build it, they will come’ approach – and I believe this recent partnership with Natural Resources Canada to add 20 new EV charging stations to the existing public network in the Capital Regional District exemplifies what’s needed to fight climate change. Our region’s transportation landscape is changing and, given the significant opportunity for reducing emissions that this shift to electric presents, this transition is a key priority for the CRD’s new Climate Action Strategy that we are discussing with municipalities right now. I’m confident that the CRD and Saanich will continue working together towards our shared goal of 770 new public level 2 stations by 2030 in an effort to help accelerate EV ownership across the region.”
-Colin Plant, Board Chair, Capital Regional District

“Climate change is one of the biggest challenges humanity faces, but we can also see it as a story of innovation. With today’s announcement of the completion of 20 new charging stations in Saanich we are celebrating a modern, more convenient future of electric mobility that benefits us all. Through our partnership with Natural Resources Canada and collaboration with the Capital Regional District, we will continue to deliver on our promise to build a robust public charging network in Saanich. We also understand that more needs to be done and we are working on that.”
-Mayor Fred Haynes, District of Saanich