Saanich, BC – The 20 fire fighters who were recognized at an annual ceremony on November 7 share a commitment to service and passion for the community.

“Saanich Fire is an integral part of our municipality and the region,” said Mayor Fred Haynes. “I’m thrilled to honour these talented and dedicated men and women and celebrate their service.”

This year, five new members were welcomed to the department by Mayor Fred Haynes and Fire Chief Michael Burgess. Service medals and service bars were also presented to current Saanich Fire members, and retired members were commended for their service, loyalty and leadership.

“The fire fighters that were honoured make a lasting impact on the lives of our residents every day and they deserve to be recognized for the legacy that they are building in our community,” said Chief Michael Burgess. “This is a very special way to round out our centennial year. Not only is our fire department celebrating 100 years of service, today we are celebrating a combined 500 years of service from these members.” 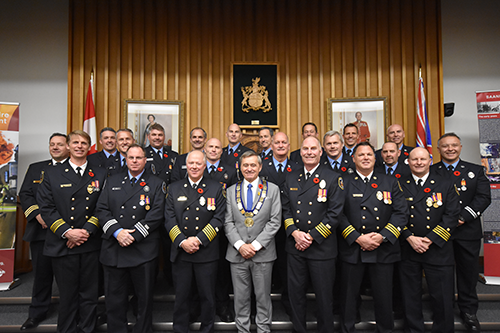