Saanich, BC – A new parcel of land has recently been donated to Saanich’s parks inventory. The parcel is home to a seasonal wetland, which is a continuation of the greater wetland known as King’s Pond, off Queensbury Avenue.

The late Mr. Brian Patriquin, by way of a gift in his will, donated a portion of the property at 1360 Queensbury Street to Saanich, to be held and used for park purposes. The completion of this donation not only brings to fruition the generous intentions of Mr. Patriquin, but it also fulfills Saanich’s aspirations to acquire this land for park purposes.

“With over 170 parks in Saanich, members of the community have no shortage of green spaces in which to relax, socialize and keep active. The addition of park land is one of the ways that we seek to improve the daily lives of the residents of Saanich,” said Mayor Fred Haynes. “Generous donations, like that of Mr. Patriquin, are just one of the many ways that we actively seek to improve our parks inventory for the future of Saanich”.

“Brian Patriquin grew up across the pond at the end of Ascot Drive with his mom Bertie Patriquin (nee Jenkins) and his younger brother Brent,” said a family representative. “His grandparents and their property were a huge influence on his love of animals and the environment. The Queensbury home/farm was a place where people in the surrounding area could enjoy the serenity. Brian loved those memories and cherished the gift of owing the property after his grandparents and mom passed away. His idea from the start was to give the land and pond to Saanich so they can continue to be the great stewards of the property that he was.”

Naming of the pond

Although the donated parcel is adjacent to King’s Pond Park, and the wetland on it is not physically separate from King’s Pond, it was the express wish of Mr. Patriquin that the pond on the donated parcel be named “Jenkins Pond” in honour of his maternal grandparents, who also resided on the property. For that reason, the new parcel has been named “Jenkins Pond Park”. Parks staff will soon be installing a bench next to the pond to commemorate the gift. 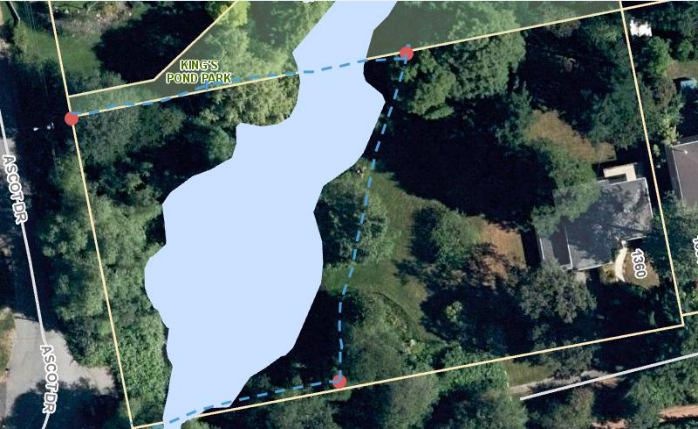 Aerial photo showing the parcel and the surrounding area.